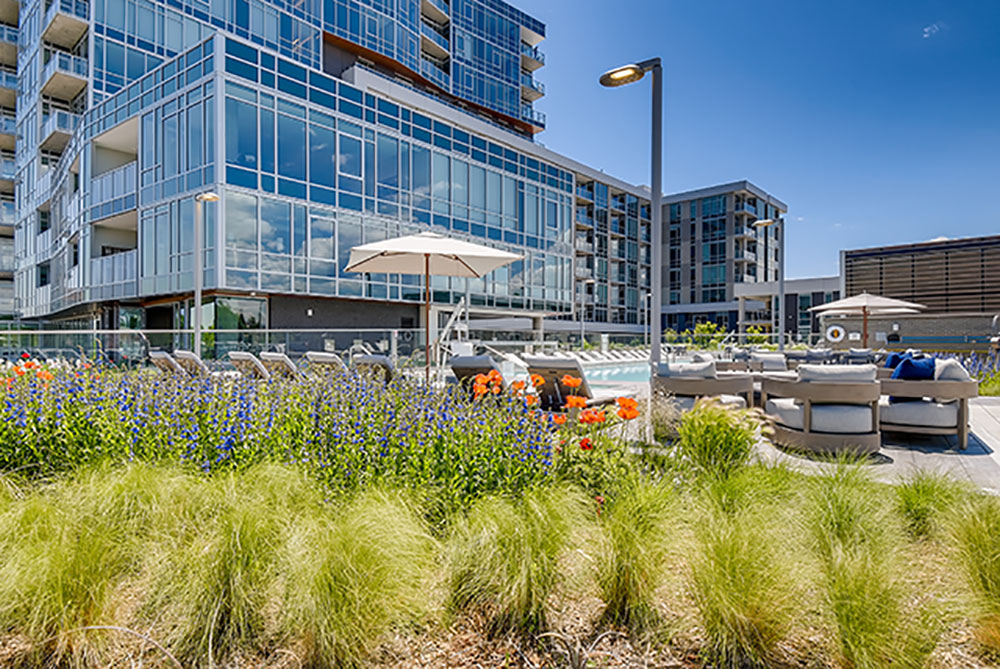 A clear mind enhances our mental and physical well-being, which is why a focus was put on incorporating ample landscaping throughout Lakehouse in order to promote biophilia – the human connection to nature.

First popularized by biologist and naturalist Edward O. Wilson, biophilia refers to the idea that humans possess an innate biological tendency to seek connections with nature and other forms of life. Wilson observed “… as we grow up we learn to distinguish life from the inanimate and as a result our spirit is woven and hope arises… So it is only natural that humans would possess an inborn predisposition to seek connections with nature, forming a love of life and the living world.”

It’s because of this idea that NAVA Real Estate Development has worked with the architecture, landscape architecture, interior design and art consulting teams to implement biophilia throughout Lakehouse to create spaces inspired by nature that are immersive and calming.

In order to get a better understanding of the story behind the landscaping here at Lakehouse, we sat down with Suzanne Serna, landscape architect with Stantec, who led the vision for all of the beautiful plants and greenery found on the property:

Can you tell us a little bit about the story and inspiration behind the landscaping?

I personally have visited a number of green roofs around Denver and the experiences are one in the same. While it’s lovely to be able to see the plants bloom and take shape throughout the year, most lack a sense of connectivity for those who are enjoying it. So at Lakehouse, we really wanted to elevate the experience and make the terrace unlike anything else in the market by creating unique spaces where residents would be able to touch, interact and connect with the landscaping.

We were also very aware of the building’s relationship to Sloan’s Lake and studied the different ecologies surrounding Lakehouse in order to get a better understanding of what would thrive and flow throughout the property. Through this research, our goal was to create a seamless transition between the amenity areas and gardens by breaking up the terrace into five sections including:

What kinds of plants can you find on property and why were they chosen? Could you give a few specific examples?

We were very inspired by Lakehouse’s connection to Sloan’s Lake, so in order to create a fluid dynamic between the shape of the garden beds and walkways that flows through the area like water, we needed to incorporate landscaping that would stand up to Colorado’s volatile weather.

To do this, we conducted extensive shade studies as many plants struggle in six hours of  intense, direct sunlight on a rooftop condition. We also wanted to select plants that would have as close to a 12-month presence as possible, be that in the bloom, leaf color/texture, or remnant architectural structure during the progression of each season . The intention was for the gardens to not feel static and allow the opportunity for residents to see and feel the ecological progression throughout the year. Although we would have preferred to use all native plants, we had to supplement with some that are not native that can better withstand the heat and frost.

Some examples of the trees, perennials, bulbs and grasses we have growing currently at Lakehouse include: 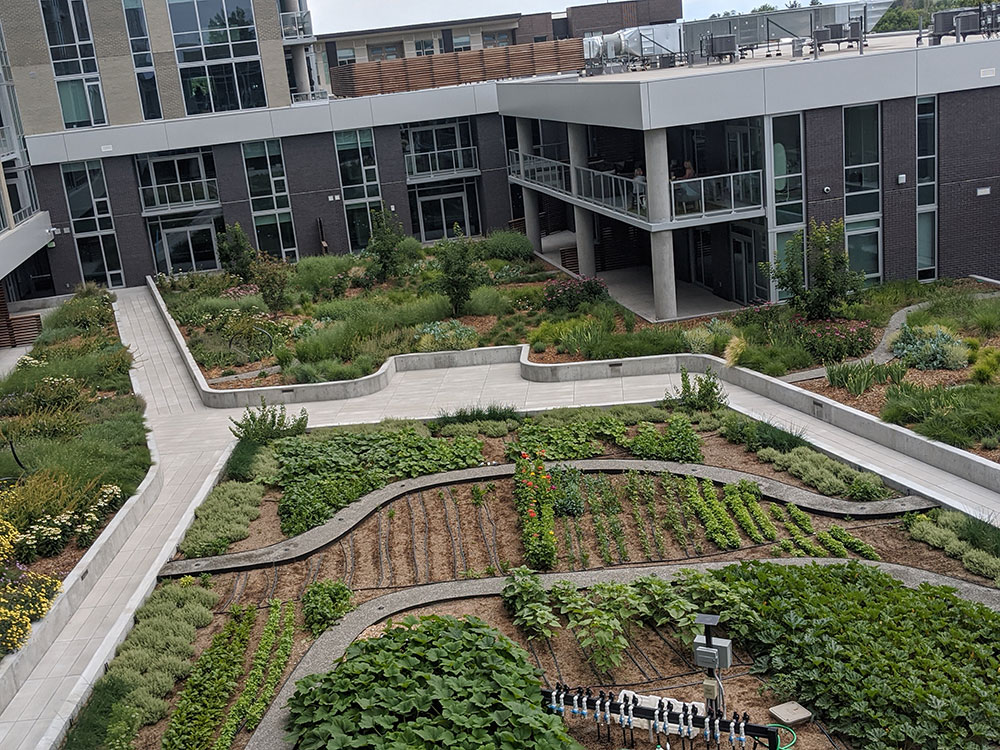 How does the presence of plants on property help promote biophilia as part of the Mind component to the WELL Building Standard?

There’s something to be said about botanical gardens playing a really integral part of tourism within every major city. Humans are very tactile and want to naturally be around nature. These aren’t just random plants that were selected, they celebrate color, texture and seasonal change.

Landscape does usually take a backseat to our day-to-day lives. Lakehouse is the first project where we are receiving emails from residents who want to know more and learn more about the plants and perennials around the community. People who are choosing to live in Lakehouse very clearly want to understand their natural surroundings.

How will the landscaping continue to evolve at Lakehouse?

Right now, we are collecting data on post-construction analysis which will help us understand how this green roof will thrive over the years. In order to do this, we are putting together a master document that has real-time data on what happens when plants fail and what we can use to infill them.. This will change over time. Our goal is for the amenity deck to eventually take on its own personality and change with the seasons.

What’s your favorite thing about the landscaping at Lakehouse?

I’m always fond of the bloom on the flower. I’ve been working on this project for more than five years and when I visit the site, it’s amazing to see the sea of poppy heads and the grass sprouting on the amenity deck. There’s so much happiness for me to see the remnants of the plants shifting into season.

This really is such a unique project and it wouldn’t be possible without really strong team comraderie. Everyone latched on to the importance of the amenity deck and it really did take an entire community to make this work. I feel incredibly fortunate to be part of such an amazing undertaking.

To learn more about the connected and healthy Lakehouse lifestyle that awaits, contact us at 303.974.HOME or info@lakehouse17.com to schedule a private in-person or virtual tour. Don’t forget to register online to join our interest list and stay up to date with the latest project news, construction updates, events and neighborhood happenings.