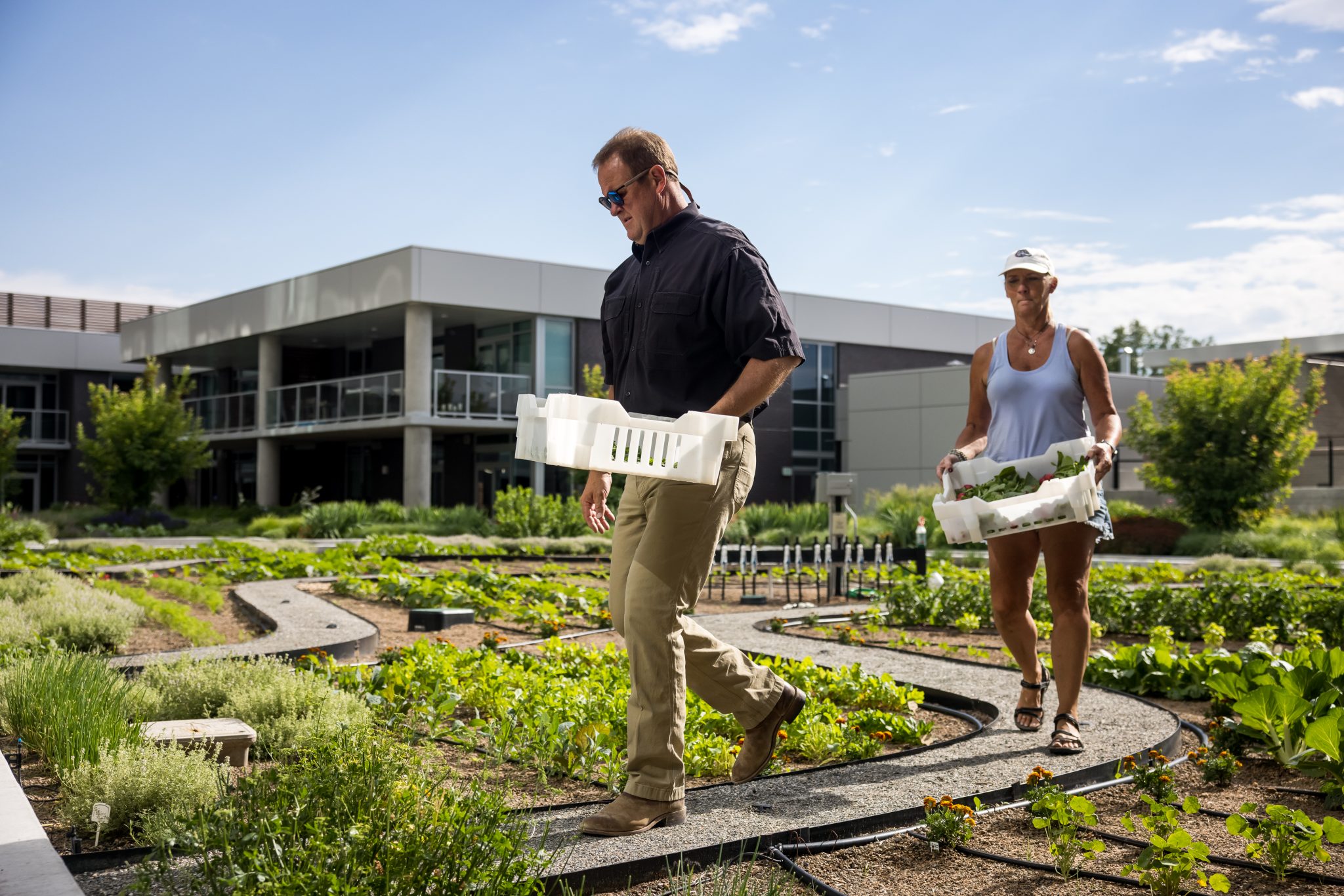 Located at the center of the community, Lakehouse’s organic Urban Farm produces a broad range of fresh herbs and produce for resident use, and is easily one of our most popular onsite amenities. Here, we speak with Urban Farm creator and Agriburbia co-owner Matthew “Quint” Redmond about Agriburbia’s roots, what has made Lakehouse’s Urban Farm uniquely successful and what produce is being harvested this month. 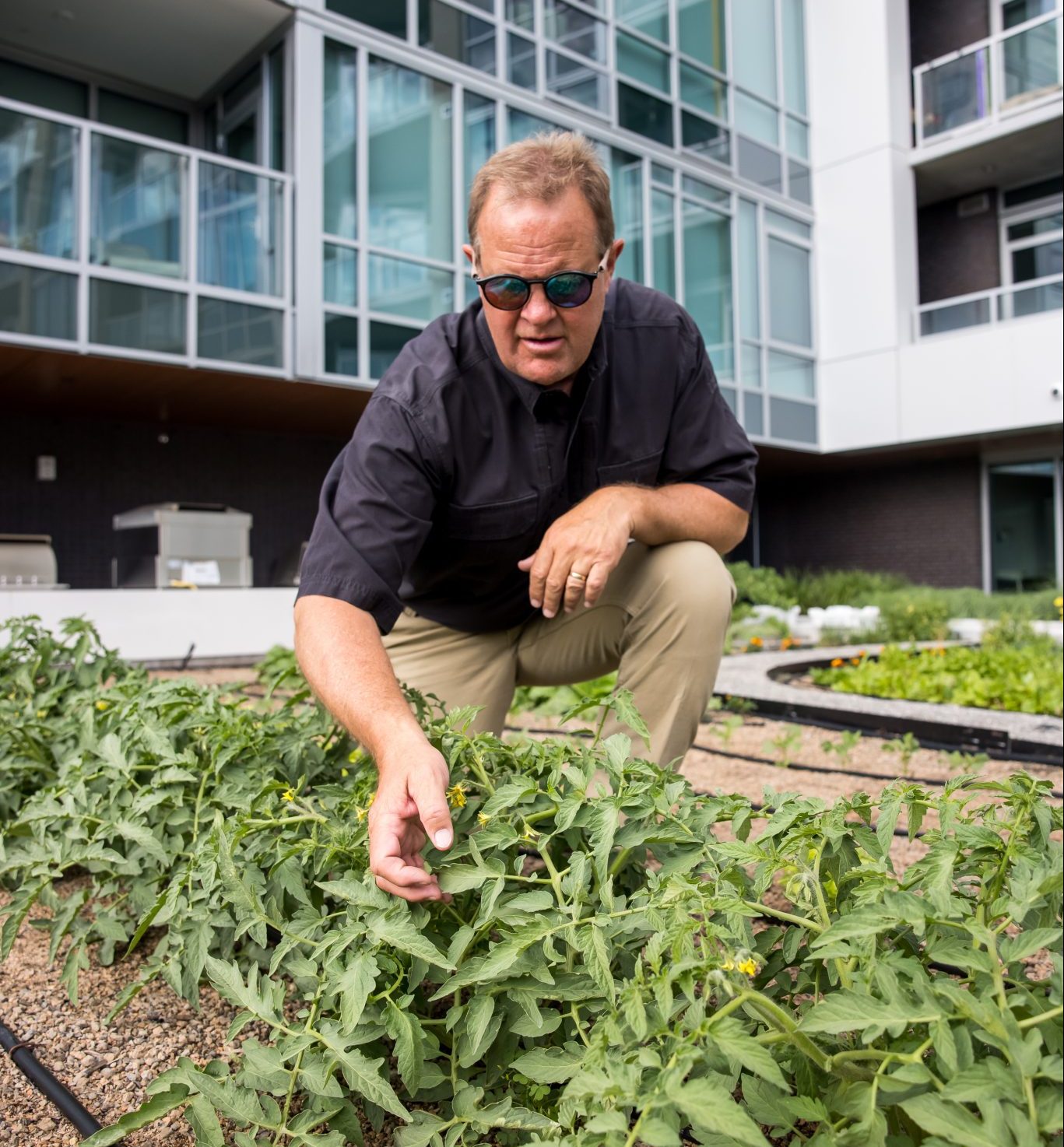 Tell us a little bit about Agriburbia’s backstory.

We are a unique combination of real estate, agriculture and health and wellness.

My wife Jen (who is also the farmer and planner) started a small design firm in 1997.  In 2003, we refocused the firm to design and plan developments with food and agriculture as part of the infrastructure. We got one project with agriculture and since then no one wants us to do anything else.  We have been doing food, agriculture and health-related projects ever since and have them all over the country and even overseas.

The best thing about Lakehouse—and what makes it so successful—is that nothing is accidental or an afterthought.  The developers, NAVA Real Estate Development,  had great foresight and included us very early to help plan and design the Urban Farm . This allowed us to really understand the goals and strategy for the whole project, including its pursuit of a WELL Building Certification. The developers also trusted us when we shared what it would take to create a viable community farm.

Working together as a team has made all the difference. They also allowed us to work on the Urban Farm early and get it going before the building opened. The first season of the farm produced over 1,600 pounds of food, which was enjoyed by people working on Lakehouse and donated to local food banks so as not to go to waste.  It’s all been great fun! 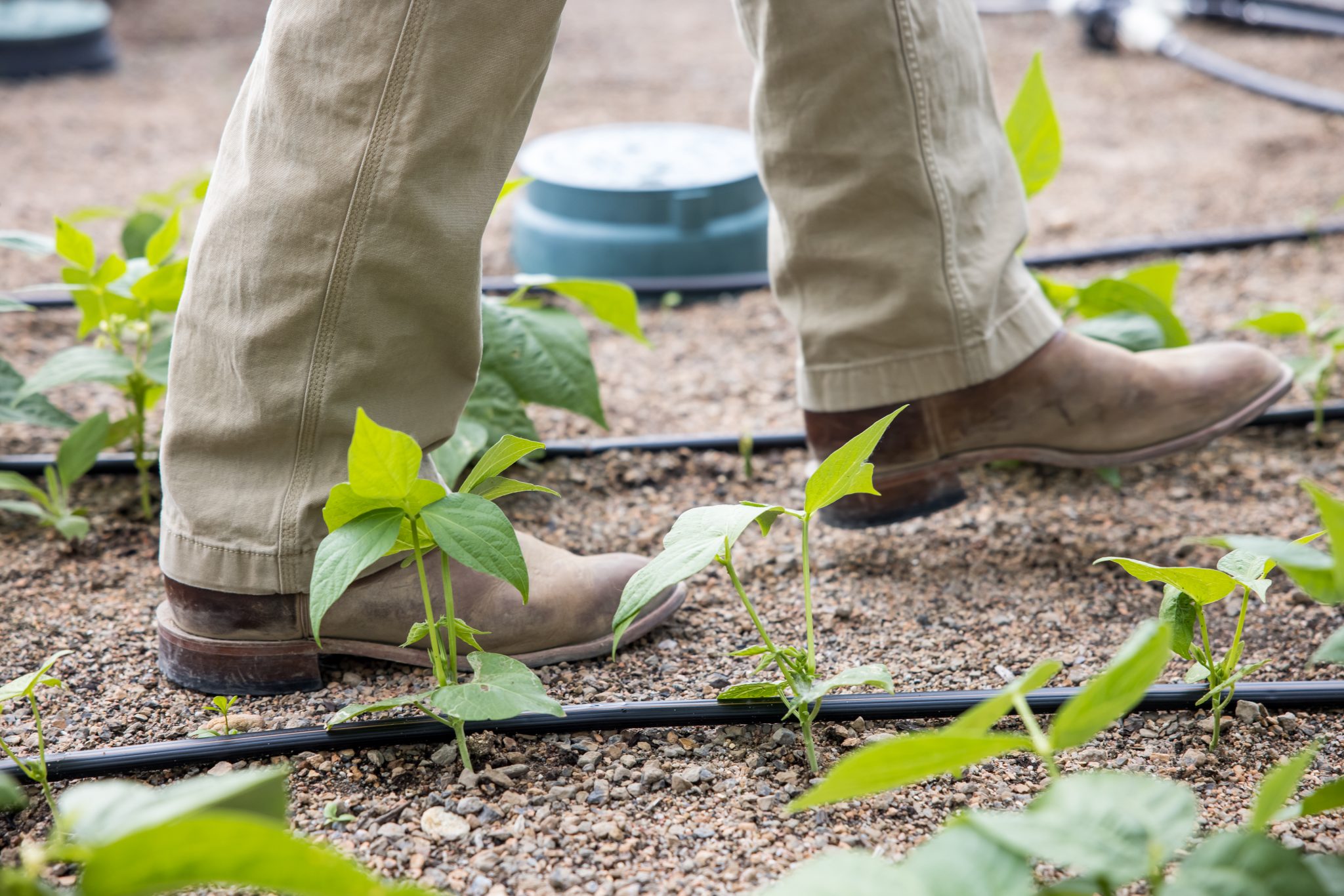 What can we expect from this month’s harvest at Lakehouse’s Urban Farm?

What’s the typical life cycle of crops at Lakehouse?

We manage it like a larger farm and try to produce as much as possible using only natural techniques. That said, there are things coming and going all season long.  We plan in February and March, plant in May and then there are things being harvested every week even into late October.  We have great support and interest from the Lakehouse community—Chef Tom (Lakehouse’s dedicated community chef) puts on events regularly with items from the farm and other great food.  He is fantastic. Anna Stahl, Lakehouse’s Wellness Concierge, also holds lots of hands-on educational events that center on the produce grown in the Urban Farm. 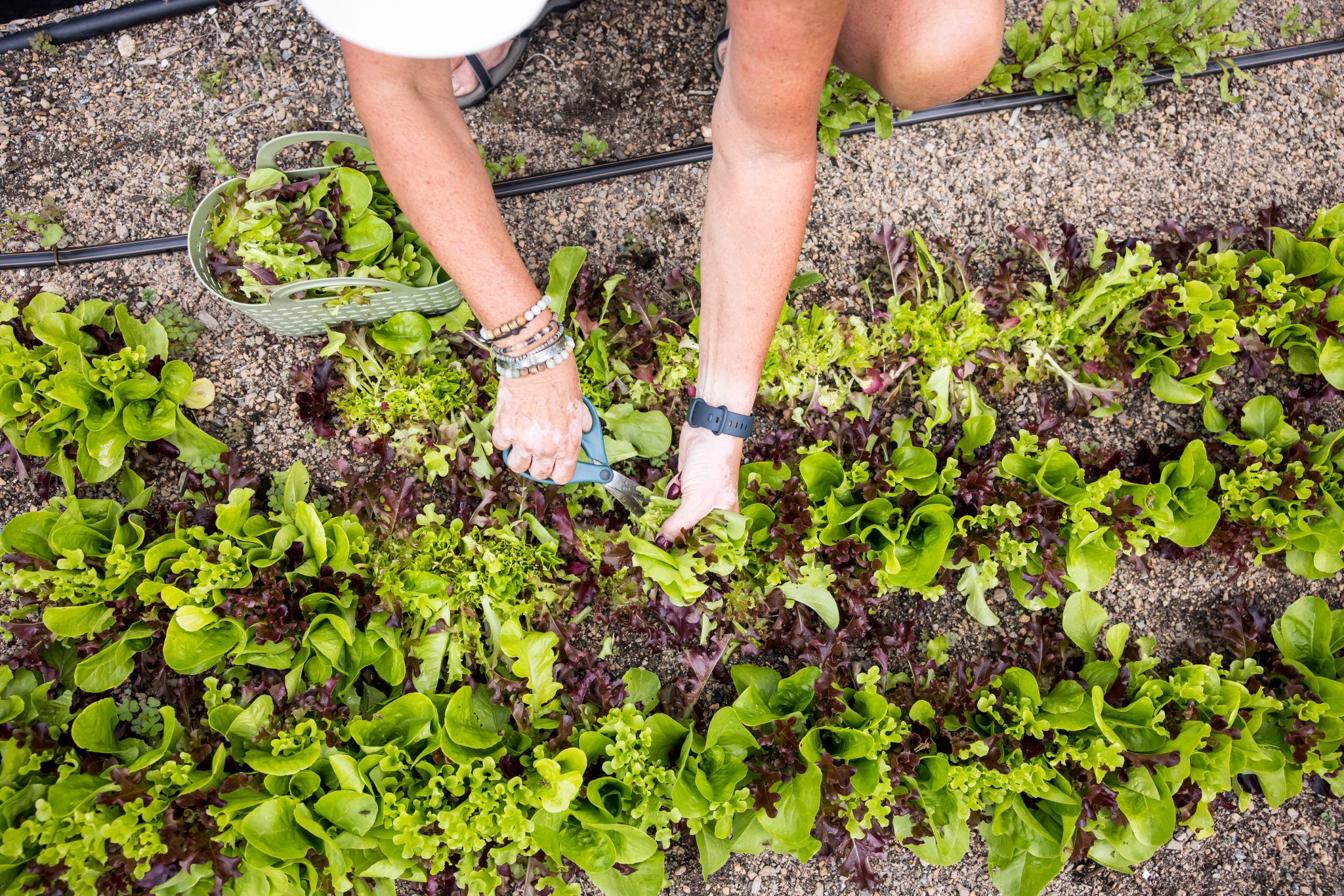 What would you say is a particularly underrated crop that the Urban Farm has?

Truthfully, they are all really good because they are consumed within minutes of being harvested.

How many pounds of produce has the Urban Farm produced last year and this year? 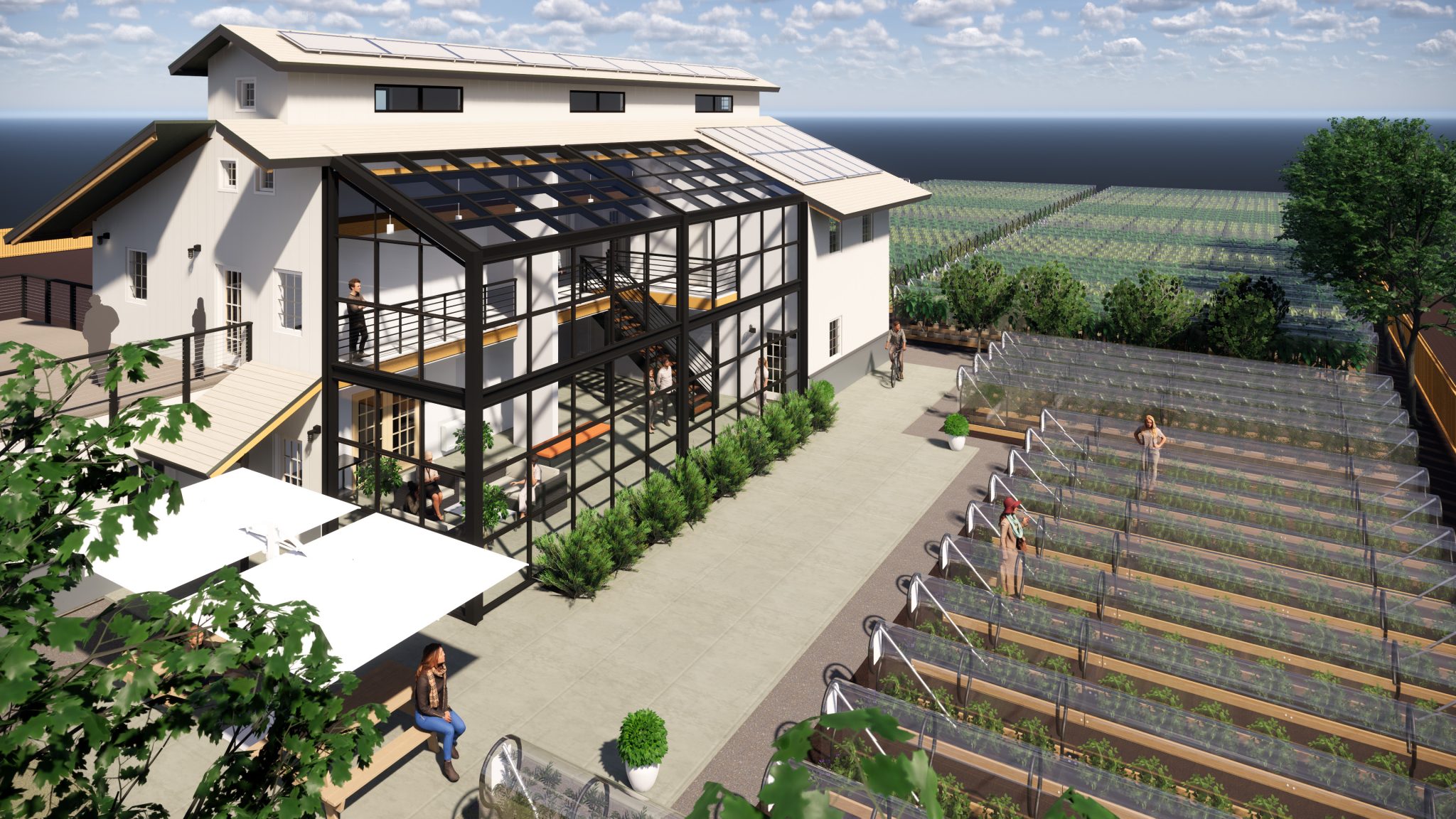 Can you tell us about some of Agriburbia’s upcoming projects?

We have a 380-acre project in the works that ecompasses 12 high intensity farms, 70 acres of recreation, a medical office, charter school and agriculture all mixed together. This project is a farm but also has a doctor’s office, surgery suite and dentist onsite. We always say that food is the new medicine, and this project really harmonizes all facets of health.

We also have multiple patents for a geothermally heated trellis, which allows us to grow intensively and produce greater amounts of food per square foot.  It also allows for many or most things to be grown almost year-round. And we have a whole FArmKitTM building, a prefab system with space for living, production, processing and more. We’re also about to start a subdivision for diabetics where everything around you is designed to support your health.

How does Agriburbia’s work fit into Lakehouse’s bigger picture of “better living?

Our work on the Urban Farm has become even more successful than we could have thought.  The farm being the centerpiece of the outdoor deck area helps everyone know it is there and then we all work together to make sure it is always beautiful and productive—everyone wants to be a part of that.  We know most of the residents at Lakehouse. Our regular farmer sees them all the time and there is just a great interaction with everyone we have met. It’s truly a community.