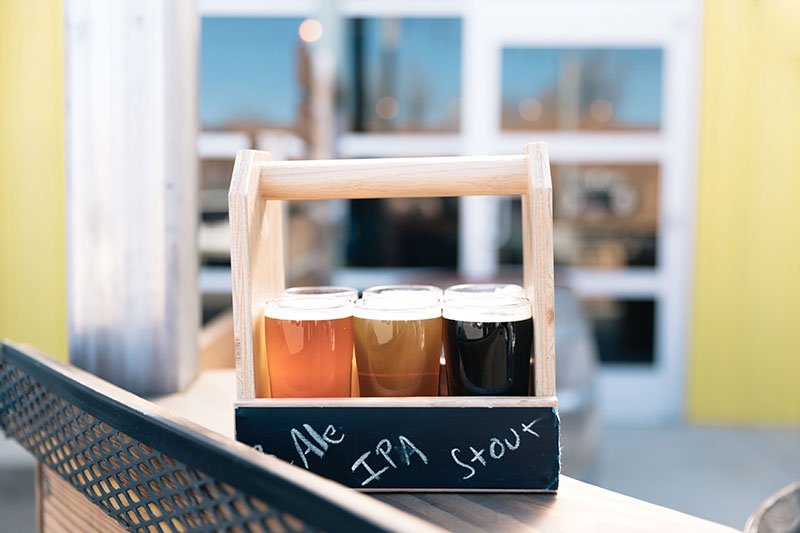 Whether you’re craving a light summer sipper or a rich IPA, the Mile High City reigns supreme when it comes to beer culture with nearly 150 breweries to choose from. The best part? Some of the best options in town are located less than two miles from Sloan’s Lake.

According to Denver Business Journal, “Despite having a far lower population than states like New York, Texas and Florida, Colorado stomps them in one area: the number of craft breweries it has. With 348, Colorado is the state with the second-most breweries in the nation, behind only California, which has 687 total. That means Colorado has six breweries for every 100,000 residents.”

Not only do future homeowners at Lakehouse have access to great amenities and lakefront living, they’ll also be just a hop away from some of the best breweries and tasting rooms in Denver.

Here are some of our favorites that are just a bike ride away:

Joyride is the perfect place to enjoy Denver’s crisp air while overlooking Sloan’s Lake from the northwest side. Featuring five flagship craft beers complemented by rotating taps of seasonal and specialty brews, there’s truly something for all palates whether you’re a craft-beer newbie or aficionado. If you get hungry, Joyride also hosts some of Denver’s favorite food trucks throughout the week. (1.1 miles from Lakehouse)

Nestled within Denver’s Highlands neighborhood, Hogshead Brewery is an old 1950s gas station turned urban-neighborhood pub. Specializing in cask-conditioned ales, the process is a bit different as Hogshead beers are unfiltered and unpasteurized and served from a cask without additional nitrogen or carbon-dioxide pressure. Some of Hogsheads most popular ales include the Chin Wag, Gilpin Black Gold and the Lake Lightning. (1.6 miles from Lakehouse)

Home to one of our favorite tasting rooms, Little Machine offers a laid-back atmosphere within the historic Jefferson Park neighborhood. With 16 beers on tap, Little Machine has a Colorado-built brewing system that offers a wide range of flavor profiles from Mexican-style lagers to tart raspberry and boysenberry beers. You can even bring in takeout from your favorite restaurant or the food truck of the day and enjoy dinner on the dog-friendly patio. (1.2 miles from Lakehouse)

Seedstock Brewery blends modern charm with ancestral accents from the founders Eastern European heritage. Featuring a five-barrel fermenting system, Seedstock gives those ponying up to the bar a history lesson with classic German and Czech-style pilsners in addition to IPAs with subtle hops. With nine beers on tap, some of our favorites include the Vanilla Espresso Stout, Seedstock Amber, Weizenbock and the Bohemian Ale. (0.5 miles from Lakehouse)

Sloan’s Lake is buzzing with great restaurants, shopping and happy hours – and the options keep growing. To see some more of our favorites, check out the neighborhood map on our new website – https://lakehouse17.com/neighborhood/

To learn more about the connected and healthy Lakehouse lifestyle that awaits, stop by our Sales Center at 1565 Raleigh Street #108. We’re open Wednesday through Sunday from 10am to 5pm and by appointment. Don’t forget to register online to join our interest list and stay up to date with the latest project news, construction updates, events and neighborhood happenings.